Give Me Your Hands ‘Cos You’re Wonderful 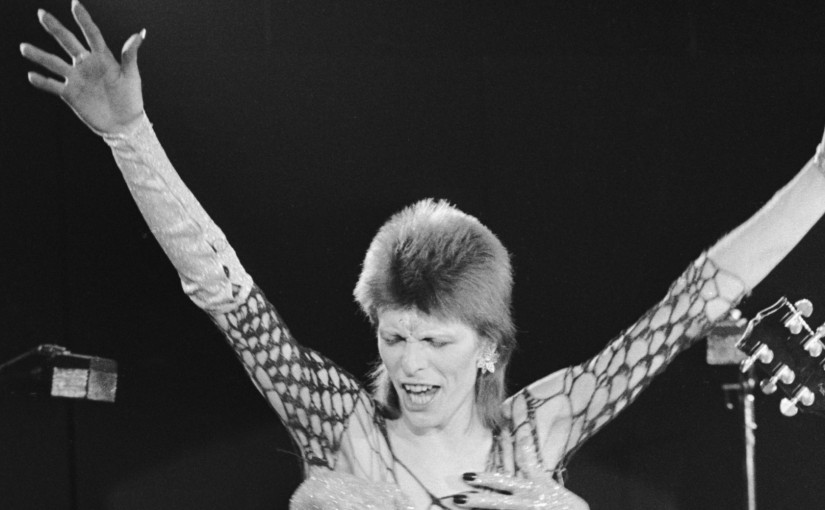 The last thing my father did before he died was play a flute solo in church. Power move. He was an atheist who frequented our Episcopalian church with the simple excuse to play music for people. He ended on a high note–literally–collapsing against a piano. He felt no pain. He would elicit no such drama.

“Atheist Dies in Church, Performs Final Solo,” read the headline in my mind.

“David Bowie’s last release, Lazarus, was ‘parting gift’ for fans in carefully planned finale,” crept across my screen in the still of the night.

Your country’s new
Your friends are new
Your house and even your eyes are new
Your maid is new and your accent, too
But your fear is as old as the world

The most important gift I received during my last Christmas of drinking came from my neighbor, Fly. He brought me fancy Russian vodka, a wooden print of Hunter S. Thompson and a canvas screenprint of David Bowie’s mug shot. I was ecstatic. I drank the vodka with a friend in one night while Bowie flatly stared at me, his gaze steadfast and unmoving. The picture I took of those gifts turned out to be a prophetic one–I tumbled into sobriety not three months later. Even in black and white, Bowie’s steely glare penetrated the chaos in my mind. It was unsettling.

The walls (one of which was blue, blue, electric blue) in my apartment at “Rampart Village,” Los Angeles, were incredibly thin. Something there is that doesn’t love a wall. We tenants came to recognize the distinctive footsteps of every neighbor who walked up the stairs. Fly learned mine for Apartment 203. Every so often, he would blast Bowie next door to welcome me home. I could hear him playing Hunky Dory and Young Americans at all times of the day and night.

In high school, my sister and I participated in every after school activity we could think of, which meant we got home late. When we’d turn onto Berkeley Avenue after a 45-minute commute from Richmond to Petersburg, we’d hear our father playing the flute from a mile away, making sure to keep the window open. He serenaded us at home, performing covers of Marvin Gaye and Big Band songs. I can still feel the exciting comfort in those familiar sounds. He showed unequivocal love through his music and art.

Gordon Morrisette, self-portrait done in either the 50s or 60s…

I know I’ve seen that face before.

Dance in bars and restaurants,
Home with anyone who wants,
Strange he’s standing there alone,
Staring eyes chill me to the bone.

I remember the day I declared Bowie as my Higher Power. I couldn’t wait to tell my sponsor. She giggled, then sweetly surprised me with Bowie episodes from Flight of the Conchords. I thanked her and gently asked if it was okay that I was sexually attracted to my Higher Power. She laughed as we both let that absurdity sink in. I knew Bowie was my One because he had been there all along. Labyrinth, released the year I was born (1986), 12-steps the year I came to believe (2014). The program required me to come to be willing to accept that something greater than myself could restore me to sanity. I knew choosing a mere mortal was tricky, but I gave no fucks. His music would be my muse. My shaky hands and my temples dotting with sweat ceased and desisted when Bowie came on the radio and that’s all I needed to know. As I binged on Netflix, three or four months sober, I began recognizing Bowie songs in some of my favorite movies and shows. His song Fashion plays as Cher chooses her outfit for school in the opening scene of Clueless; All The Young Dudes plays as the stoner dudes walk the “grassy knoll.” Cat People (Putting Out Fire) breaks out at the beginning dance sequence on an episode of The Office called Café Disco. I couldn’t believe my ears.

My friends threw me a party when I turned one year sober. Our crew at Hollywood Latenight–the misfits, the miscreants, the tight-pant-leather-wearing pod people–rang in my new year and it was one of the best nights of my life. My male friend showed up in a revealing glitter onesie. My other friend, the matriarch of our group, brought me Bowie vinyl covers and lyrics scrawled out with purpose. Another friend brought me a Bowie mug that looked like a Warhol print. We watched projections of Bowie being all of the things. We talked about our sad pasts with music on our minds. That night, Lady Stardust was born…

My name at Hollywood Latenight is “Judgy Snatch.” It suits me.

The last time I flew when I was actively drinking, I reeked of vodka. It was an early-early- morning flight, but that didn’t stop me from going hard the night before. My good friend met me at the airport, startled at the sight of me and my fire-breathing pyrotechnics. She furrowed her eyebrows and asked me if that was alcohol she smelled. I laughed it off, but the shame of her question cut me so deeply I couldn’t catch my breath. Not that I would have wanted to.

The first time I flew sober, I was skiddish and terrified. I paced up and down the airport’s corridor, trying to keep myself busy. I gave up and sat down after a couple of minutes because my heels were unforgiving. The second I sat down, Bowie and Freddie Mercury came blasting over the speakers. I wept with joy. I had arrived and Bowie hadn’t forgotten me. When I got off the plane, I met a woman from San Diego outside smoking a cigarette who casually mentioned she was several years sober. She gave me her number, whereas I was ready to give her my first-born.

You see, Bowie was always there. I never worshipped his human side; I prayed to his spirit. Somewhere in the far reaches of my body, mind and soul, I was able to differentiate between the man and the myth. Bowie tapped into something not many of us have access to: pure creativity. He helped us dream. He made it okay to be weird as fuck. To me, his death elevated Bowie to mystical, mythical proportions. And he makes even more sense now.

When I moved home, my mother asked me why I chose David Bowie as my Higher Power. (I think she wanted to get to the bottom of why in hell I got Bowie’s likeness tattooed on my right arm.) I told her it was because I found he had a power greater than I did. My mother matter-of-factly replied, “He’s not more powerful than you are, Lucy.” And she’s right, he’s not. But his flamboyancy gave me the permission I needed to be myself. Bowie the human is not who has kept me sober for nearly two years.  Rather, my connection to his music incited the imagination I never knew I had. His performances proved to me that I, too, could tap into the same power–absent of fear or judgement–that made him move with such freedom. With all that said, my dad wouldn’t have cared for the Bowie theatrics or for that matter, my tattoo. But because my love for you would break my heart in two…(sorry dad)!

I love you, Bowie. I don’t love you the way I love my father, but I love you all the same. And Dad, I know what good music is because of you. I remember your stories about playing back-up for Sonny and Cher and Marvin Gaye at the Norfolk Scope. Your sound was always jazz, but you played some mean funk with the greats. You never liked rock ‘n’ roll all that much, but you respected good musicianship when you heard it. You and Bowie left a legacy of dignified talent and love. I can honestly say that I would not be who I am today if it weren’t for the likes of you. I promise I won’t look for you, but I’ll listen. The Stars (Are Out Tonight), shining for both of you. The Universe honors you…

Stars are never sleeping
Dead ones and the living

Bowie, my heart will be your moving shelter. I will love you forever and ever, amen. So keep your ‘lectric eye on me, babe. Put your ray gun to my head. Press your space face close to mine, love–

Freak out in a moonage daydream,