One of my essays was featured in this book 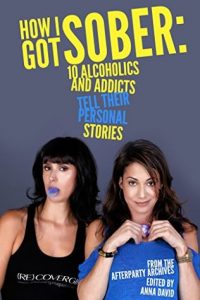 “How I Got Sober: 10 Alcoholics and Addicts Tell Their Personal Stories: From the AfterParty Archives”

Below you can read the text in full.

Be sure to sign up for my email list and I’ll let you know about new releases.

How I Got Sober

“No alcohol or sugar for two weeks.”

In 2005, that was the meanest thing anyone had ever said to me. But I obeyed the authors of The South Beach Diet—the Protein Prophets—because they offered me an answer to my BMI dilemma: the Big Book of Dieting. I could hang; I would suspend the disbelief that mine would be a sugar-free, alcohol-free world in order to fix my problem. At that point, I had never met a carb or a type of booze I didn’t like. Faced with the prospect of either, I never hesitated to consume both. For that tragic lack of willpower, I needed to repent somehow. I hadn’t yet discovered the ever-seductive Replace Your Food With Booze Diet. No, no—that was the advanced nutrition of alcoholic starvation. I needed to practice more self-control first.

Fresh off the heels of another inspiring read, I felt overcome with moxie for my new health journey. I came across an outdated issue of Vogue that featured Kate Moss. I then Googled her in search of her most devastatingly chic pictures to shame myself into losing weight. The first thing I found was a quote from her saying, “Nothing tastes as good as skinny feels.” With those words, that stunning, elfin woman assumed the role of my Muse for those dastardly 14 days, while I dropped 10 pounds in less than a week. I didn’t own a full-length mirror at the time, because I lived by the Clueless mentality that mirrors always lie. I didn’t own a camera, either, so I spent a lot of time looking at myself in reflective surfaces.

The days—by which I mean mini-eternities—off of sugar and booze were the most unbearable of my life. I gorged myself on ricotta cheese, almonds, denial, celery and peanut butter. I drank Diet Dr. Pepper and water. I ate an ungodly amount of sugar-free products. There are no words for hunger of such magnitude. I cancelled contact with most people I knew. I reasoned that by doing so, I could avoid being arrested for cannibalism and/or attempted murder. Best not to trouble the waters, I thought.

I kept my first dirty little secret while on the Sadistic Bitch Diet. On the 12th day, I snuck a few shots of Jack Daniels alone in my room. I figured that by bragging about my self-discipline, my friends would surely hold me accountable to follow the diet. The problem was, I never told anyone about my slip. Instead, I re-read the book in a panic, looking for some alcohol-related loophole. Why wasn’t there something in the footnotes for someone like me who needed alcohol to survive? An anchor of sadness and shame sunk down into my empty stomach. I realized that the real reason I’d started the diet was that my tolerance for alcohol would be lower by the time I finished. I saw for the first time that I couldn’t stop myself from drinking. The only way I could manage my alcohol intake was to keep dieting. I knew what this meant for me: I would have to become hollow to make more room for booze.

I became unglued when I graduated college. I began to drink alone in the apartments I rented with my entry-level salaries. I felt overwhelmed by my desire to control the addictive side of my nature. So I threw money, alcohol and cigarettes at the problem. The first picture I ever took of my apartment in Orlando captures the first meal I cooked there: pasta puttenesca, a side salad with goat cheese and a bottle of red wine. I took that picture because I wanted proof that I was able to drink just one glass of wine without drinking alone at home. I never forgot that night because it was the last time I was able to have just one drink. After that, I stopped counting.

One day, after a weight-related meltdown, I decided to try one last diet. I had gained back some weight I’d lost over the summer (note: it is always summer in Orlando) and I couldn’t take it anymore. I joined Weight Watchers with all the hope I had left in my system. By some weird algorithm, the program calculated the amount of points I got in a week. Coincidentally, drinks were worth a lot. I did my own math because that did not compute. I drank a week’s worth of food points in one night of partying. The great experiment had failed.

And that’s when I gave up. I couldn’t control my drinking, therefore I would stop eating. For two years straight, I consciously chose a new kind of eating disorder. The kind where you don’t eat, you drink. I invited cocaine and Adderall to the party, but neither took hold of my brain. I became obsessed with filling my emptiness with empty calories. I used all of my energy to fight hunger pangs in order to save calories for booze. I got drunker more quickly. I threw up often. I always found a way to get wasted, no matter how hungry I was. And I was always hungry.

The night I hit bottom started like any other. I drank wine on an empty stomach with my friend while we chain-smoked on my balcony. She went to bed around 12 am while I stayed up to nourish my addiction. I listened to my drunk-cry playlist outside, alone. I cried over past relationships and broken hearts. I chased red wine with rye whiskey. I smoked two packs of cigarettes. After five hours of iTunes serenades, I was suddenly hit with a panic attack. I stumbled inside my apartment nearing my blackout bewitching hour of 5 am. I instinctively rushed to the kitchen to get some water and eat something after two days with no food. There I was, alone in my kitchen, scrounging for scraps. When I opened the refrigerator, its contents were as empty as my stomach. I crumpled onto the floor, crying with my head in my hands. I felt myself start to fade into a blackout. When I came to, my friend was kneeling next to me, asking me what had happened. My response was “I just can’t do this anymore” between broken sobs.

My alcoholic bottom was my caloric downfall. There were no dramatic fights, no run-ins with the law. I was brought to my knees by the hunger of loneliness only alcoholics can know. I finally became the hollow woman I always wanted to be, like the tortured souls in T.S. Eliot’s poem “The Hollow Men.” My alcoholism had finally come to collect its debt from me and I had no more diets to protect me from that. This is the way my drinking ended—“This is the way the world ends; not with a bang but a whimper.”

The next day, I asked for help. My sober friend took me to my first AA meeting. She stood by me, silently offering her strength and support. To date, I have been sober nearly 15 months. As it happens, I find that I am always well-fed.